You are here: Home / Bits of Nonsense / Winners Are Grinners 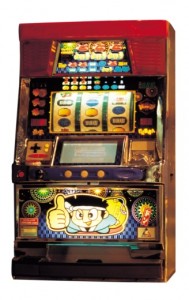 I’ve played the pokies about three times in my life.

The last time was about three weeks ago at a 21st party held at a pub.

We walked past rows of glittering pokie machines operated by people transfixed by the lights and the lure of easy money. Or maybe they were just bored and needed something to do.

‘No, I’m not donating my money to a higher power (gaming venue).

She bank-rolled me for a dollar and I sat down at the one cent  machine that threatened to pay me heaps of money. Yeah, promises, promises.

I watched the dollar coin disappear into the slot and pressed some buttons.  Lights flashed, Kajing, Kajing – credits spun.

I felt I was in the ‘Promised Land’.

I had just won. Tripled my bank roll of one dollar.

I kept feeding the machine and kept winning.

Two dollars of credit appeared, then three, then four. I was on a roll.

I gave Sue her one dollar bankroll back because that’s the sort of guy I am.

Anyway I was winning more that I was losing and after about half an hour I decided to cash in my credits.

The coins rattled towards me. I had won 700% of my investment.

I walked away a winner.

For the rest of the night I kept those seven dollar coins in my hand. Every now and again I would shake them and feel them rattle against each other.

Surprisingly my life didn’t change. No epiphany either to go back and try and win more money.

Just a feeling of ‘what’s the point of it’.

Footnote: Stats – over three decades and three visits to pokie venues I’m about ten dollars ahead. I might go back in ten years time if I’m desperate.