I never liked walking up stairs. I preferred to sprint so I could get to the top as quickly as possible.

But on 21 July 1969, forty years ago,  I was forced to walk very slowly indeed up Collingwood Tech’s wide wooden steps, being crowded and bustled by fellow students, as we were herded into the school hall.

The hall filled quickly and, by the time I entered, the only seats available were at the back. 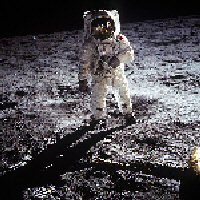 Eighty yards from me on the stage sat a flickering black and white television set on a metal stand. The stand was about 6 feet high and from the back of the hall the television set looked like a matchbox.

I watched those grainy, poor quality images on the school television set in fascination, and wondered how a piece of metal containing human beings could hurtle through 382,000 miles of space and land on the moon.

It was a momentous day, and not just because we had an excuse to miss classes.

It was momentous because we shared a dream-come-true with 700 million other people who were watching the same images around the world. A dream human beings had shared for thousands of years – the impossible dream of travelling to the moon.

Impossible until that moment.

Sometimes our own impossible dreams can become reality without travelling further than our own minds. To start the journey we need to believe the impossible may be possible and then take a single step to help propel our dream towards reality.

As Confucius once said, ‘a journey of a thousand miles begins with a single step.’