You are here: Home / Bits of Nonsense / Dumb Dumb Moment 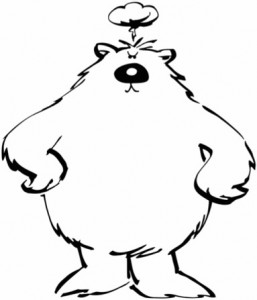 Have you ever had a dumb dumb moment?

Well, I have had my share of dumb dumb moments and the latest one was a doozy.

I’d just got home from shopping for groceries, jumped out of the car, grabbed most of the bags and raced to the back door. I unlocked the door, stumbled in and placed my shopping bags on the table.

I went back to get the remaining bags. As I left the laundry area I accidently knocked over the mop and bucket which tumbled forward and hit the backdoor. It slammed shut. I was locked outside.

Well, it was the first time I had kicked the bucket and the result was worse than death.

I tried to figure out how to get back inside.

So I used my cat burglary skills to break back into my house.

Well, it was more wombat skill than cat because I pushed too hard and the large window panel shattered and fell inside the kitchen.

I climbed through the gap and narrowly avoided decaptitation from the jagged glass edges.

As I jumped from the kitchen sink onto the floor I stepped on the shattered glass sounding like a breakfast cereal. Snap, crackle, pop.

The next few hours were spent cursing, cleaning up the mess and repairing the broken window.

I learned three lessons from my dumb dumb moment.

Every one has a dumb dumb moment.

And don’t kick the bucket!