You are here: Home / Bits of Nonsense / Beware Of Vampires 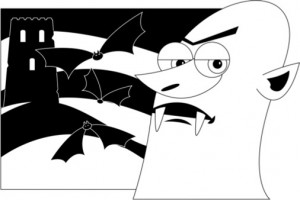 I was on the phone the other day talking to a fellow I knew and for most of the one-sided conversation all I got was what’s wrong with the world.

It was a whinge (complain) fest that I found tiring to hear and it felt like all the energy was being sucked out of me. Just like a vampire sucking on an exposed neck. I almost lost the will to live, listening to all this negativity.

He eventually said to me, ‘and how are you?’ I felt like saying ‘terrific until I started to speak to you.’  But manners or my comotose state prevented me from being rude.

There are people out there who I’m sure are members of the Vampire Union whose mission in life is to suck the energy out of anyone willling to listen to their blood curdling  whinges.

I suppose I should invest in some garlic to hang around my neck or maybe just drive a wooden stake through their hearts.

But I can’t really be bothered.

Maybe I should just avoid these vampires altogether – or at the very least have a ready-made anti vampire excuse so I can escape the ordeal.

Something like, ‘Oh, excuse me, I need to go. My blood transfusion  is ready.’